The view from the Vista House, perched on a cliff seven hundred feet above the Columbia River, makes me feel as if the world has just been formed. Rough spires of rock emerge from broad swaths of water, dense stands of huge conifers dominate the hillsides, and a multitude of sandy islands and points disappear into a bank of seemingly life-giving clouds. Aside from a ribbon of highway that disappears into the forest, there is no sign of human habitation as I gaze eastward. My desire to be out there sailing is nearly overpowering. Unfortunately, on this particular day, I’m leading a tour, so I vow to come back with my boys for an overnighter on a deserted island, ours for exploration.

Almost miraculously, the following weekend finds my wife out of town, no scheduled obligations, and ideal weather in the 70’s. I tried not to sound too excited, when I asked my youngest son, Pippin, what he wanted to on the weekend, he asked if we could go boat camping.

“Well, let’s see if your brother wants to do that,” I replied in as tempered a fashion as I could.

At 13, Pippin’s older brother, Merry, still isn’t too cool to go out on the boat, but I feared that he’d reject the idea just to assert himself. “Hey Merry,” I inquired, “what do you think about a little boat camping trip this weekend?”

“Where are we going?” he asked, as much a confirmation as a question.

I’d already done some research and had a few locations in mind. I wanted someplace reasonably close to Portland, so we could sail more than drive, and a location that was far enough away that it wouldn’t be full of hullabaloos. Even with its vast size, Government Island’s proximity to the airport was instantly ruled out. The isolation of Sand Island looked promising, but I was politely told by a ranger that no camping is allowed there. Reed Island seemed just far enough out of town to keep down the crowds and large enough to escape from any yahoos who might wander up in their motorboats, so I set it as our target.

While I don’t like to structure my kid’s outdoor experiences too much, I do actively try to provide the dreamy air of adventure that the crew of children have in Arthur Ransome’s Swallows and Amazons books. I aspire to pack with the ease that the crew of the Swallow uses as they prepare for an outing. “Under the main thwart was a big tin box with the books and writing paper and other things that had to be kept dry, like night-clothes…. biscuit tins with bread, tea, sugar, salt… and two big sacks stuffed with blankets and rugs.” Despite the mention of such critical items as a big seed cake and four hay bags, “to serve as beds and mattresses,” not one piece of safety equipment is described!

Aside from the addition of one VHF radio, a tiny first aid kit, and a chart, our packing was similarly haphazard. At only 18 feet, Row Bird has a surprisingly large carrying capacity. Two tents, bulky sleeping pads, a bag of books and art supplies, kindling, a candle lantern, extra coats, cooking gear, shoes, clothes, two day’s worth of food, and a small basketball easily disappeared into the hatches.

The forecast called for 10 to 12 knot winds, however when we arrived at the boat launch, there was scarcely enough breeze for the leaves on a tree to move and I noticed that beyond the dock, there was either a lot more current than I’m used to or the wind was blowing steadily. In either case, we’d driven twenty miles and, perhaps foolishly, I had no hesitation about putting the boat in the water.

Once at the dock, I could feel the current pulling on the mooring lines, but I acted nonchalantly, calling out the plan. “OK, Merry, I’m going to row us around the end of the dock, you’re going to man the tiller. When we get to the end of the marina, you’re going to turn the boat head to wind, I’ll pull up the mainsail.” After a pause I added quietly, “And if we get washed downstream, we’ll go towards those houses near the shore, and figure out what to do.”

Pippin busied himself in the snack bag while Merry scanned ahead of us, largely unaware that we were about to head into a strong current on one the largest rivers in the United States.

Despite being pulled nearly half a mile downstream, the plan worked remarkably well. Our sails were soon full and the gurgle of the river filled Row Bird with the sounds of adventure. With the hull pushing against the current, we cut a mean wake as we moved upriver. The wind picked up and the boat surged forward, then slid back, then crept forward again. A little rowing got us further along. After nearly an hour of sailing, we had made it back where we started!

Unfazed, I pushed on, thinking that I might find an eddy or at least gentler currents on the opposite shore. This worked admirably until we realized out that our chart was correct: outside the navigation channel there was scarcely three feet of water. Our centerboard struck a gravel bar, so I popped it up and tacked back toward the channel. Moments later a huge tug and double barge appeared in the channel. In a few seconds we’d have to choose between heading for the shallows, trying to maintain our position against a wake and current, or fleeing back to the marina. Given our meeting with the gravel a few moments earlier, the choice was easy.

Seldom had a wooden dock looked so good. Tied up, I sat back in the boat, watching the river move swiftly underneath me, contemplating what to do next. There was no one who could pick us up if we drifted downstream so we had to make it upstream on our own. The thought of a capsize in a swift current and frigid children washing downstream began to pervade my thoughts. Although I asked the crew what they wanted to do, my mind was made up. We could make another go of it, but after watching a keelboat with bigger sails than us losing ground, it was time to head home. 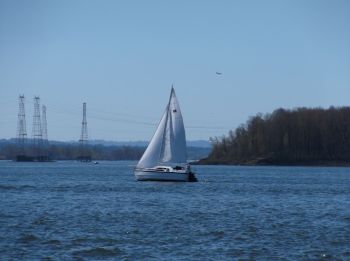 Soon a bonfire was going in the backyard. Small boys poked sticks in the flames, danced like wild men, and roasted marshmallows. The day’s brief heat dissipated, the fire wore down and so did the boys. They fell asleep with the good smell of wood smoke on their clothes, in their own beds.

4 thoughts on “The Boat Camping Trip that Wasn’t”