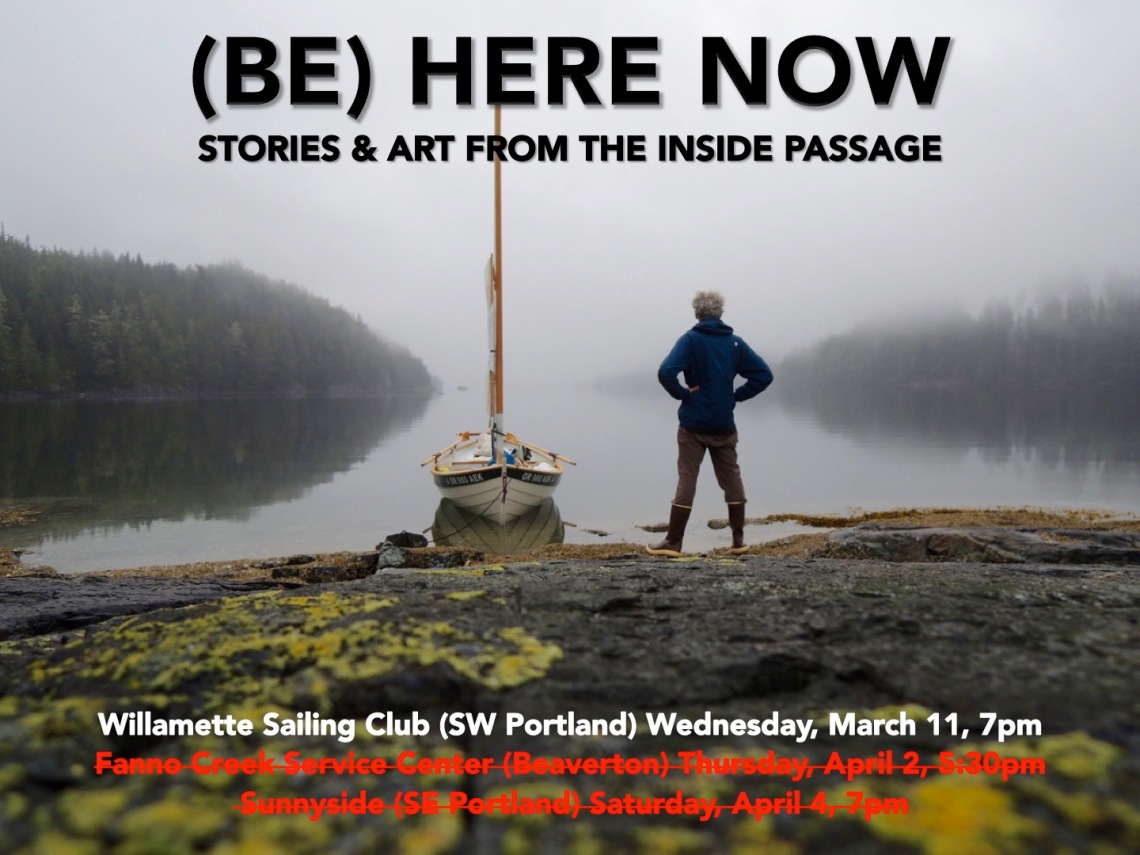 Maybe it was dumb, maybe it was an act of faith, but we did it. Despite suppressed worries about the Corona virus, (Be) Here Now, my one-man show had its first, and possibly only performance last week. As friends arrived we paused and smiled, not knowing if we should shake hands, rub elbows, or fist bump.

People at work and home had been asking when I’d do a slideshow about my summer sabbatical and trip on the Inside Passage. I was excited enough to do it right away, but I really wasn’t ready. I didn’t want to just reel off 500 slides describing where I went and what I saw. I wanted to create an experience; something where even the landlubber could get some sense of how it felt to be in a small boat on the Inside Passage.

My good friend Andy Bike and I, with zero theater experience between us, schemed, wrote, rewrote and rearranged what became a storytelling session with an art show featuring an assortment of the watercolors, dioramas, and line drawings that the voyage inspired.

With pie-pan stage lights, props, several silly costume changes, and parlor tricks (like a cloth wave we forgot to use), tales were told. The audience laughed, cringed, and came along for a ride. An hour later, people clapped and even stuck around for a Q&A session. The cast and crew felt a surge of excitement- we’d pulled off our first show.

A few days later, the schools shut down, the virus was deemed a pandemic, and I sat at home chatting on the phone with Andy about how to make the show better. I wondered if we should even bother. As I crossed off the dates for the two upcoming shows we had scheduled, I felt bad for all those sick people out there, and felt powerless.

But then I recalled the thirty other sailors and curious souls who turned out; I was inspired by the human spirit that longs for adventure and connection, even in the face of uncertainty. Then I thought, we’re going to get through this. We’re going to hit the stage again.