If you’re going to send a wooden whale on a migration, you need a vessel to send it in; so I designed a box. A few weeks later, Andy stepped up and said he wanted to help make it. Andy’s pretty handy with wood, and easily creates things with basic tools that I never could, so I thanked him for his offer. It would be fun to build the box with someone else.

Then Andy got our friend Vince involved somehow. Or maybe Andy just volunteered Vince’s garage as our work space. In any case, on what turned out to be the rainiest day in months, the three of us huddled in Vince’s cold garage and reviewed the plan I had informally drawn on my sketch pad. Modifications were proposed. An old wooden ammo box serving as a shelf on the wall caught our eye. It was made of long solid boards, fastened together with thin wooden cross-pieces and nails. It wasn’t fancy, but it had a rough-hewn charm that seemed to match the character of the whale I was refining at home.

“What if we made the box look like that?” someone asked.

“I really like the rope handles,” I said. “And it has a nice nautical look.”

“You can have it, if you want,” Vince offered.

But after measuring the ammo box, we decided it was too big. For the migration to be practical, the whale’s box had to be small enough to fit in the front seat of a car. Any bigger than that, and it would get hard to transport. If the whale project was going to be successful, the whale had to stay on the move. A big box would be more of an anchor than anything else.

I had brought a load of wood and a nail gun to our temporary workshop. Andy had hauled a improbably large piece of plywood on his bike, and Vince produced a variety of handsome cedar scraps. Now with a new vision for the box, we dug through our piles of wood, searching for just the right pieces. A final design incorporating all of our materials was hastily devised. 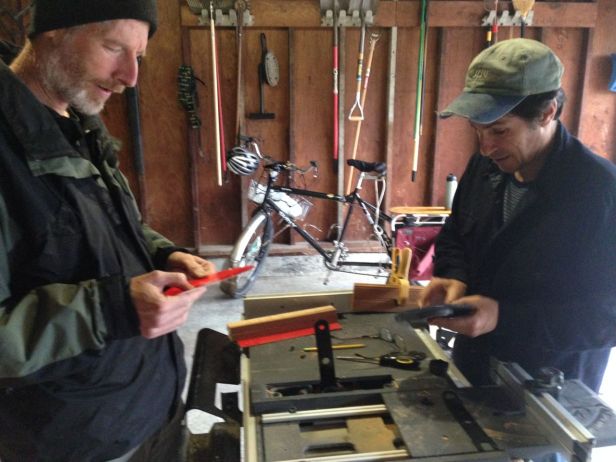 For hours we sawed, hammered, and glued with dedication and focus. Coffee was made and consumed, burritos and beer arrived; and finally, late in the afternoon, a rustic box with a hinged lid was completed.

When it was time to head home, I started to load the box into the front seat of my car, but when I felt some wet glue touch my hand, I placed it in the trunk instead.

“What is that thing?” my wife asked when she saw me carry the box into the basement.

“It’s to carry the whale, “I replied.

I frowned, stepped back, and re-examined the afternoon’s work. My wife was right. The box my friends and I had made suddenly looked awful bulky. A quick test run revealed that getting it into the passenger seat would be a challenge.

Uncertain how to proceed, I left the box sitting untouched for a few weeks. Then one day I started to disassemble it, trying to salvage what I could; but much of it was no longer usable. Surveying the pile of wood on my workbench, I couldn’t help feeling like I’d wasted my friends’ time.

John Ruskin’s words from 1890 came to mind: “What we ourselves have built, we are at liberty to throw down. But what other men gave their strength, and wealth, and life to accomplish, their right over it does not pass away with their death.”

My friends were very much alive, but those hours we spent building the box were gone. Still, we’d had fun. And sometimes it’s only in building a prototype that the right design emerges. There’s a new box now, constructed of old parts and new, just waiting. Waiting for the spring migration to begin.

5 thoughts on “Tearing it Apart”